Happy birthday to me.

A year ago today, my phone rang.

A woman on the other end said , " Can you come back in this Thursday, just so we can take some more pictures? Don't worry about it, though. It's probably nothing." 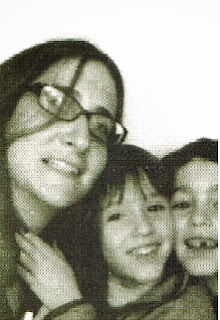 I hung up the phone slightly rattled, as I'd never received a call back after a mammogram before. Still, one tends to go with what one has already experienced. And the majority of my health scares (except for a little white pimple on my nose that wouldn't go away and turned out to be a basal cell carcinoma) had turned out to be nothing. At 1pm, I picked my boys up from an early release day at school and took them to the movies, where we documented the moment in a photo booth. I definitely remember feeling a little spooked at the theater. Still,  I really had no concept of awaited me just around the corner.
Yesterday I dug back into an old journal to see if I had written about this time. Here's what I found:

"One week and the world has done a sort of tilt on me. A simple test, a mammogram, the day before my birthday. Well, who planned that, you might ask. I did. Bad plan. Bad, bad plan. On my birthday, I got a call. Calcifications, she said. "Probably nothing but want to take more pictures." On Thursday, I'm back in the one-sized fits all pink robe that barely covers my upper body nakedness, waiting in a room with a bunch of strangers, my comrades in their matching pink robes watching a TV show called "Steve." Steve is  wearing tall, springy shoes on his feet - some sort of new fitness device. Another man is also wearing these strange shoes and is bouncing around rhythmically in them, doing something akin to aerobics on steroids. They are jumping , laughing, looking ridiculous, when a woman calls my name.
I follow her into the mammography room. I stand before the machine and the nurse begins contorting my boobs and arms into all sort of unnatural positions, like a Gumby toy. When we're done, I thank the woman (what I am thanking her for? I think. But it's automatic).
I'm back out in the waiting room now. Even though it's just been a few minutes, some of the faces have changed. New soldiers in the ranks. This time I don't watch TV. This time I dig through the bounty of outdated magazines on the table for something recent and find the October issue of Vogue. Other women get called and disappear behind the door. For some, it's judgement day; others will never even remember being here. A blip.
A woman I remember seeing and smiling at during the Steve show comes back from the abyss and takes a seat again in the waiting room. She's my soul mate for the moment, the two of us waiting for the radiologist to read our results while others simply come and go, onto the next thing on their to-do list today. The door, the gateway, opens again. A nurse calls my soul mate, who stands up and walks toward her.
"You can get dressed and go," the nurse says. The woman smiles, then escapes.

For some reason, this makes me think the odds are not in my favor. She got off, so I won't. I text my husband, "This waiting is getting to me. " I try to watch TV again. And then I'm called. The nurse does not say "You can go now." Instead I pass through the gateway into the first circle of hell--a small, sparsely furnished room that smells like antiseptic where I'm left to wait. Shit.
The radiologist appears with a young a man, a medical student. I know the radiologist. Her name is Betsy. She looks a little bit like Big Bird. I'd interviewed her before, many years ago, for the newsletter when I was still a Lahey rookie. She tells me about the findings, microcalcifications that look suspicious. Could be a sign of early cancer. Or not. She explains about the biopsy. How it's done
I ask lots of questions.
"We've got a journalist here," Betsy jokes to the medical student. He's still smiling. I wonder what he's thinking.

This is where the entry ends. Fast forward through biopsies, genetic testing, MRIs. It's before my surgery and I'm sitting in a room with a doctor at Lahey who is telling me what I might expect moving forward. Surgery. Chemo. Radiation. Maybe Herceptin.

It's just a year of your life, she says.

And so here I sit, one year later.  I'm somewhere between who I was in that movie theater a year ago, and who I want to be. Mostly I'm stunned how quickly a year can pass.

My friend Rachel used to joke with me when I complained about my birthday, about getting older: "It's better than the alternative."  A sentiment that has never felt more true.

Yet how does one celebrate such a momentous birthday? I'm not really sure, but I think I'm going to stretch it out for a while. It may involve a massage, a new wardrobe, Anchorman 2, and a 2nd annual I had a Boob Once contest. I'll keep you posted. It will involve starting Tamoxifen,

When I was 11, I wrote my father a b'day card with a poem, or rather rhyme, inside.
"51 and still having fun," it read.
I must have been very proud of that card to still remember it all these years later. So, leveraging that complex rhyming structure, I write myself a similar "card" today: