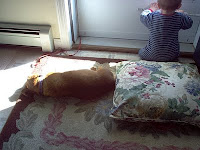 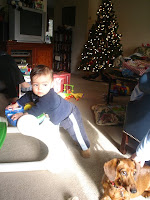 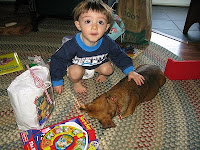 My mother-in-law’s dog died this weekend. It wasn’t a shock, but it was a surprise nonetheless. Sadie was ill for some time, but we had just seen her two weeks ago and she seemed to be doing OK. With her passing occurring just before Thanksgiving, the first thing I thought when I heard she had died was “The boys will be so sad.” Then “What will we tell them?”

But it also dawned on me that I am sad. We always go to my mother-in-law’s house for holidays, and Sadie is always there, waiting for scraps from the table or a good belly rub. She was a part of our family. I can remember when she was just a puppy; back when I was just my husband’s girlfriend. She had spunk then. She’d run around, driven by all that puppy energy, just like a furry toddler. Give her a toy, like the stuffed monkey or mailman dolls we picked up for her, and she’d tear it to shreds in no time at all. Yes, she had mellowed, as most of us do as we age. And then her illness sapped even more energy, but with the help of my mother-in-law, she hung in there.

Some folks say “Well, it’s just a dog.” But typically the attachment goes much deeper than that. No doubt animals, dogs in particular, often make better companions than humans. They’re loyal. They’re goofy without self-consciousness, making us laugh and smile. They’re warm, and like to cuddle.

So this is my little goodbye tribute to Sadie. In the spirit of Thanksgiving, thanks for bringing joy to our lives. You will surely be missed.(and if anyone has tips for what to tell the boys, please let me know!)
Posted by Amy at 8:37 AM 1 comment:

Julie and Amy (and poop)

So last weekend I actually went to the movies with a friend. We saw Julie and Julia. Although I really enjoyed the movie, I couldn't shake this negative feeling I was having toward Julie, the main character. At first I wasn't sure why I disliked her so, but then it dawned on me: I was jealous. Julie wanted to be a "real" writer. And so do I. Only thing is is that Julie's dream came true...the book and then, even more astounding, the movie! I couldn't help thinking why her and not me?

Some of the reasons are obvious. For one, I hate cooking. And my timing is off. Julie caught the blogging buzz early while I came to it after everyone and their mother and grandmother started doing it. Finally, Julie had no kids at the time she launched her cooking adventure, while I have two of them. In other words, I'm probably screwed.

Still, I've been thinking about this. Maybe all it takes is a good idea. Maybe that's really all that sets me and miss Julie apart, and holds the key to my book and movie deal.
So, here it is. My good idea (And free to tell me what you think...not that anyone is actually reading this):
I will start a blog about re-potty training my son.
I'll post daily and tell everyone how it's going. Then, after the buzz takes off maybe some NY Times or Wall Street Journal reporter will want to come over and write a story about us. Oh, and I'll parallel my life with the life story of the great Mrs. Fyodor Vassilyev of Shuya, Russia, in the 1700s. Perhaps you've heard of her? She had 69 children ...the most children born to any woman ever. Imagine how much potty training she had to do?! I'm sure it will make for some very juicy narrative. Probably more juicy than watching someone murder innocent lobsters and dissect dead ducks, don't you think?
Anyway, wish me luck!
Posted by Amy at 6:38 PM No comments:

It was an act of desperation. Normally, I prefer not to ask for help. I don't like to air my dirty laundry (in this case literal dirty laundry) to others if I can avoid it. But the time had come for getting some advice.
You see, after successfully bribing Ethan to pee and poop on the potty, we were regressing. At first I thought it was a fluke, but as pooping in his underwear became an almost daily, if not twice daily, occurence, I sensed the problem was more serious than I originally thought.
So I posted the following cry for help on the local parent's list: Poop; the sequel PLEASE HELP! Then I described the problem, and waited for the wisdom to come trickling in.

But let me digress for a moment. My relationship with poop wasn't always this bad. In the beginning , I remember poop being more of a wondrous affair. How happy we were when the miconium, the first poop, arrived! How adorable it was when Jonas would grunt in the library or the grocery store to announce that his next poop was coming! But alas, those days are long gone. I have reached poop saturation. I knew this for certain when I had a dream recently in which I stumbled upon a locker room covered in crap. I don't think you have to be Sigmund Freud to diagnose my problem.

Fortunately, the good and wise folk of the Arlington parent's list came to my rescue. The responses to my cry for help did not just come trickling in - they came pouring in! It seems Ethan's poopy problem was a common one, and one that people wanted to talk about. Most parents, it seemed, were against punishing for "accidents." Although there were a couple who proposed that I make my son actually wash the shit out of his underwear.
"Just have him wring it out in the toilet," one mom wrote. "I did this with my son and he never pooped in his underwear again!"
At first this seemed like a novel and promising idea. Then I rememberd how much my son likes to clean things; how he begs to wash the dishes, or play with the spray bottle, or pretend to mop the kitchen. With my luck, he'd probably love washing out his underwear so much that he'd poop in them even more.

Some moms asked if Ethan might be constipated. Others wondered if there was something stressful at home that could be causing the problem and I of course deleted those emails immediately. The majority of folks, however, agreed that this was just a normal phase, and one best treated with patience and bribes. The mom who most convinced me that positive reinforcement was the answer was the one who sent her five year old to potty school. She wrote, "The folks there said never, EVER punish your child for not going on the potty."
This was straight from the mouth of a potty school graduate's mom. Who was I to question her?

So, as of this morning, Ethan's potty chart is back on the refrigerator. And I am happy to report that this afternoon Ethan completed the deed on the potty. In return, he got two chocolate kisses, a Bob the Builder sticker and several high fives and hugs from his mom.
Shortly after he said to me, "Mommy, I like going on the potty because it makes you really happy."
Ah...if only that were enough.
Posted by Amy at 1:37 PM No comments: