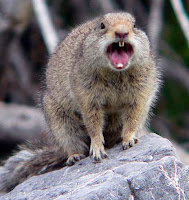 Two days after the squash incident, a squirrel decided to make an appearance in our attic.
I had already forgotten the certainty with which my mother-in-law said we had squirrels in the attic when she slept over two weeks ago.
“Yep, I heard them all night…scurrying around,” she said.
For the next couple of nights, I listened, but heard nothing.
“She was probably confusing the sounds of the heater with squirrels,” I said to Ben, who agreed.
And that was that. At least until something crashed to the ground Saturday morning and Ben opened the attic door to see a squirrel standing at the top of the stairs.
“Was it big?” I asked, as though a slight difference in size mattered when there were wild animals in the house.
“Yep,” he said. “Looked big to me.”
The boys were excited.
Jonas grabbed his Red Sox baseball bat and kept calling “Where are you squirrel?” Then he practiced how he’d “bonk” the critter, using his stuffed penguin as a stand-in.
All day, philosophical discussions ensued, such as the following:

Ethan: Um, the squirrel jumped up to the window then he chewed up the squares and the glass and found a hiding spot in the attic.

Jonas: We can build a house for him.

Ethan: But the squirrel likes hiding places in the forest. Only in the forest, not here where there are houses. They like bears. If a bear comes and tries to get him he finds a really good hiding spot.

Jonas: No, he gets in his car and drives away.

Ethan: But squirrels can’t drive – but they have legs on their bottom and they run like babies (Ethan demonstrates by crawling on the floor)

Jonas: And, um, we can build a cage for him.

Ethan: but he likes it in the forest only

Ben: So, Jonas, are you still going to bonk the squirrel?

Ben: So you’re going to build a house for the squirrel and then bonk it?

Ethan: But his house has to be in the forest.

Ben: Where’s the forest? We don’t really have forest in Arlington.

Ben: So how does the squirrel get to Chicago?

Ben: But who drives the squirrel airplane?

Jonas: Can I watch Spiderman?

I am happy to report that no squirrels were bonked that day. A nice man from BayState Wildlife (doesn’t really sound like a pest removal company does it? More like an animal sanctuary) came and installed little one way doors over the areas where the squirrels were coming in. We haven’t seen a squirrel in our house since.
Then again, they probably took a plane to Chicago where they’re living in a nice house in harmony with the bears.
Posted by Amy at 8:54 AM 2 comments:

Of Squirrels and Squash

Hell morning.
The boys are at each other, fighting and whining over everything.
I take them out in the backyard, in the snow, to try and relieve some tension.
It works. For a few minutes at least. Then:
“Jonas you’re standing on my snow!” It’s Ethan. He’s hysterical.
“Nobody owns the snow, Ethan,” I try to explain.
“But that’s MINE…my snow. I want it!” He pushes his younger brother, who tries to bite him.
“There’s enough snow to go around for everyone,” I say, while wondering how on earth I got here...to be the mother of these two insane beings.
Every now and then the irrational behavior of my children gets to me. Every now and then, my nerves feel dangerously raw. And this is definitely one of those days.
The boys continue to fight like the Arabs and the Palestinians over whose snowy territory is whose. Finally, it’s 12pm. Time for lunch.
“Time to go in!” I say, trying to sound chipper.
They both cry. They want to stay outside. I end up carrying them both upstairs, one in each arm, the two of them slipping so low their boots hit the stairs with each step. Breathless and irritable, I plop them in front of the TV to watch Calliou while I put water on the stove for Mac and Cheese.
Then I grab the squash out of the freezer.
I read the directions:
Remove from package and place in microwaveable dish.
Cook for five minutes.
Stir.
Cook for 1 minute.
This sounds easy enough, right? I mean, what could possibly go wrong?
As I begin to peel the paper off the squash, however, I notice some pieces are being difficult. They cling to the icy squash as though their worthless little paper lives depend upon it.
“Shit,” I mumble as I pick at the squash and little chunks get stuck beneath my fingernails.
I try to run the block of squash under hot water to see if that helps. Nope. The paper still clings and taunts me. For a moment I consider just throwing it, paper and all, into the microwave, but I am afraid of poisoning my children.
Instead, I grab a steak knife from the drawer. I begin by artfully trying to extract each piece of paper from the squash’s icy grip, but each time a piece comes out, there is more. I’m digging deeper and deeper, and there’s no end in sight.
“Mother f’ing squash!” I say, now manically stabbing it with the knife (BTW, did I mention that I was also hungry?). “I hate you!”
I’m lunging the knife now, barely missing the tips of the finger of my other hand. I am Tony Bates in psycho, only instead of stabbing a woman in the shower, I’m stabbing a frozen vegetable.
Then, finally, it’s out: The last piece of paper. I am elated. Game over m’fucker. I’m thinking.
“F’ you squash!” I say out loud now as I throw it in the microwave to beam it to death.
“Mom?” Ethan says from the other room. “Who are you talking to?”
“Oh, nobody, just myself,” I say, wondering who the crazy one is now.
I mean, who am I to call my children irrational when I’m stabbing and talking to a squash? This last thought makes me chuckle.
Still, it’s not over.
I pick up the remaining packaging and look for the 1-800 number to call Birdseye’s customer complaint department. A sweet woman on the other end tells me how this happens to her all the time. “What I do is run it, packaging and all, under hot water.”
I don’t want your stupid advice, lady, I’m thinking. But all I say is “Oh.”
After a pause she says, “How about I mail you some coupons?”
“That would be wonderful,” I say. “Thank you.
I hang up the phone and it's like I’m like a new person now, my nerves calmed, all thanks to some therapeutic squash mutilation, and a few coupons to look forward to in the mail.
Posted by Amy at 4:14 PM No comments: