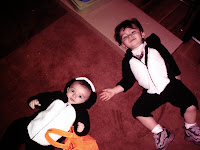 Listen all you crafty mamas out there...it's time to stop. Stop whipping up these elaborate outfits with your nifty little crafty magic fingers. No more homemade ladybugs, creatures from Finding Nemo (saw this one at Ethan's daycare yesterday...the kid had a light bulb coming off an antannae on his head...his parents are engineers I think), made from scratch dinosaurs or pretty princesses. There's a reason big companies manufacture Halloween costumes - so we will buy them! And right now, with the economy the way it is, we must buy buy buy our costumes! Heed the call, ladies!

OK. Yes, I admit. None of this really has anything to do with the economy. It's just that, well, I could not make a Halloween costume if my life depended on it. Crafty I am not (although i can talk like Yoda).

Every year, as Halloween looms closer, my stress level rises. I don't want to spend money on a costume, but I know that trying to make costumes is just not in the cards due to lack of time and artistic ability. Ethan's first Halloween I ran out and bought a kangaroo costume last minute and even that didn't go so well. Everyone thought he was a bear. Come on people! I thought. Do bears carry their young in pockets on their bellies??
This year, my husband took the lead and tried to save us some money by being crafty. He pulled out some old white sheets, cut them down and attempted to make some eye holes so the children could be ghosts. It was a decent attempt ( and he's quite sensitive about it so I won't go on about the lopsided eyeholes and the way the boys nearly tripped over themselves due to the length of the sheets).
But when it came time to dress up for their school's halloween party yesterday, nobody wanted to be a ghost. What then would we do? I pulled out the old costumes - the fireman, the turtle donated by our neighbors next door, the construction worker. But they refused.
"Mama, Justin's going to be a transformer," Ethan said.
I wasn't sure why he was telling me this. We were running late and I started to lose patience snapping "You have all these great costumes...now pick one out! There are chcildren all over the world who are starving for Halloween costumes!"
Ethan looked at me blankly. Then he started to cry, which made me feel awful. Which made me, during my lunch break, get crafty with my credit card, scooping up a Buzz LightYear costume and a Super Why costume at Toys R Us for Ethan to choose from.

So again, as fate will have it, there will be no homemade costumes for our family this year. And I will rave about your homemade this or that, "How did you do that? WOW"...swallowing my envy along with too many piece of candy.

Happy Halloween everyone.
Posted by Amy at 5:34 AM No comments:

Excuse me Disney, but my kids ARE genuises

Can you believe the nerve of the Disney company? They want to give me my money back for the Baby Einstein videos I purchased to turn my babies into genuises. Why are they assuming that these videos, such as Classical Baby, Baby MacDonald on the Farm, and my kids favorite,the Baby Wordsworth video "First Words around the House" with the cat puppet and Marlee Matlin doing the words in sign language, failed to turn my babies into genuises?!

Of course they worked! My children, now ages 3 1/2 and 2, are genuises thank you very much. Why just this morning, when I told Ethan, my 3 1/2 year old, that his breath was awful, he was smart enough to blow it in my face off and on for 45 minutes! How would he have known to do that had he not spent his early, most impressionable days plopped in front of the TV watching Baby Einstein videos for hours on end? And what about Jonas? Don't try to tell me that Baby Einstein had nothing to do with his ability to refer to the lines in my forehead as "train tracks?!" Pure genuis, I tell you. I'm a published writer and I could never have come up with such a perfet metaphor! But then again, I was a baby in the late sixties and seventies when there was no Baby Einstein.

For insinuating that my children are not genuises, I think Disney should not just reimburse me for their videos, but also pay my mortgage for six months and send Mickey Mouse to clean my house once a month. Otherwise when my genuises grow up and become high-powered lawyers, look out.
Posted by Amy at 11:54 AM 2 comments: