The Grinch Who Stole Santa

Why is it that Santa always seems so much better from afar?
Seriously.
In talking about going to see Santa, the child jumps up and down and chatters on with delight. “Let’s go! Let’s go! See Santa!”
And then the reality sets in. Slowly.
Even standing in line, the child still seems excited and restless. “When will it be my turn?!”
When Santa gets up from his throne to take a water break, the child worries. “Where is he going?! Is he coming back?”
And Santa does come back. (The parent wonders: why not keep a bottle of water by your throne? But perhaps water is just a buzz word for potty).
Finally, after a nearly 45 minute wait, it is the child’s turn.
By that time, close up, Santa isn’t looking so hot.
“Go sweetie,” we tell the child. We even push a bit.
“Go tell Santa what you want.”
The child walks up to Santa stunned.
And why shouldn’t he be stunned?!
Santa is a stranger.
Santa is old.

I remember my mother trying to get me to visit Santa in his house at the local shopping center. I was young; maybe three or four, and I remember crying in terror. Yes, terror. I did not want to go in his house. "But he'll give you a candy cane," she'd say. I'd cry some more.
Looking back, I always thought it was because I was Jewish. Maybe Jews are inherently scared of Santa or something.
Then, however, I had children of my own. Children who are only half-Jewish. And they too, seem to be frightened of Santa.

“Now get on Santa’s lap, honey, and smile,” we tell the child.
He approaches cautiously. Skeptically.
He refuses to get on Santa’s lap.
“What do you want for Christmas?” Santa bends down and asks him.
“A computer,” he whispers.
“Now turn around and look at the camera!” we yell at the child.
He turns. He stares at the camera with a blank look on his face. “Smile!” we yell. But he won’t. At least he’s not screaming and crying this year, we think. Progress.

So, I wonder, are these visits to Santa really worth it? Do we risk scarring our children by forcing them to come face to face with an overweight, elderly stranger? Look at me, for instance. I’m over 40 and I still can’t eat a candy cane.
Isn’t it better to just put the cookies out and imagine Santa coming from afar in the dark of night when we won’t have to talk to him or sit on his lap? Sure, I sound like a Grinch, but what do you think??
Posted by Amy at 11:00 AM No comments:

The Snowy Day - updated and revised 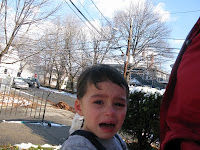 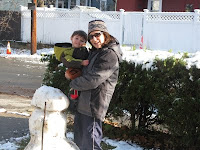 Author Ezra Jack Keats published his classic children's book the Snowy Day in 1962. It begins "One morning Peter work up and looked out the window. Snow had fallen during the night. It covered everything as far as he could see."
This is about the point where Keat's version of events digresses from my own. The following line reads "After breakfast he put on his snowsuit and ran outside."
Did he actually put on his own snow suit? Was it really that simple that he just ran outside?! I don't know who this Peter kid is, but he's nothing like my kids.
Ladies and Gentleman, here is my updated version of A Snowy Day based on the events of this past Sunday:

One almost-winter morning Ethan and Jonas woke up and looked out the window. Snow had fallen during the night. It covered everything as far as they could see.
"MOMMY! DADDY! Wake up!! It snowed! Let's shovel!!"
It was 6:30am.
Ethan and Jonas cried to go outside. They gathered their snowsuits, boots, hats and gloves from the closet and scattered everything throughout the kitchen, living room and hallway. "We're ready!" Ethan screamed.
Unfortunately, their mommy and daddy were not. They were still in bed. "Come on...!" Ethan screamed. "GET UP!"
Eventually, mommy and daddy did. Eventually, they had some coffee and much to the children's delight, began getting ready to go outside.
Mommy and daddy gathered up the snowsuits, boots, hats and gloves, which were scattered everywhere. Of course, they couldn't find one glove and mommy said "God damn it!"
"What did you say?" Ethan asked.
"Oh..nothing Let's go outside and have some fun!"
"YAY!"
On went the snowsuits. On went the boots. On went the hats and jackets. Off came a jacket.
"I dont' want to wear it," Ethan whined.
"You have to wear your jacket," mommy said.
"But it ruuuuuuuubbbbs...."
"What?"
"It's rubbing...my neck. I don't want to wear it."
"You have to wear it."
"Then I'm just going to wear it like this." He draped it around his shoulders like a shawl.
"Fine," mommy said, annoyed.
The gloves came next. Mommy tried to make them wear the waterproof ones, explaining how the kind they preferred, the regular kind, would make their hands wet and cold. Nobody was having it. Mommy tried to get the nice waterproof Land's End gloves she had purchased for Jonas on his hands but they were too big and simply slid off. "God damn it!" Mommy said again.
"Let's goooooo" Ethan whined.
Mommy gathered several different types of gloves for the boys to take outside, just in case. Daddy grabbed the camera and finally, after 20 minutes of preparing, off they went to the front yard for fun fun fun.
Ethan shoveled briefly with his kid shovel and Jonas found a large stick, which he dragged across the snow and then used to poke his brother in the leg.
"Ouch!" Ethan yelled, then swung his shovel in his brother's direction.
"Let's make a snowman!" Daddy cried, hoping to distract them. He started rolling a snowball. The boys tried to help him, but their hands were cold. Out came the gloves. Ethan was agreeable this time, putting on his waterproof mittens, which thankfully fit. Mommy tried Jonas's again but they fell to the ground and he cried and refused to try any other pairs.
"I'm hungry mommy," he said.
Moments later Ethan said "I'm cold, I want to go inside."
"What?" Mommy and Daddy said. "But we're building a snowman! This is FUN!"
"I want to go inside! Ethan whined again. "Let's goooooooooo."
Ethan cried, then Jonas followed.
"PIck me up mummy," Jonas said.
"I'm cold!" Ethan whined again. "God Damn it."
Mommy and Daddy looked at each other. They hoped the neighbors would not hear all this. Then mommy wondered Is there something wrong with my children that they can't have fun in the snow? She was pleased when she saw another father and his son across the way and the father was saying to his boy in frustration "You said you wanted to go on your scooter! Now ride your scooter or we're going home!" The boy was crying. This made mommy feel better and less alone.
In the end, mommy and daddy quickly finished the snowman as Ethan cried from behind the door to the foyer. Daddy took some pictures and then they all went inside, everyone frazzled, and had some hot cocoa.
"That was fun," Ethan said as he sipped his drink.
Mommy looked at him in wonder, forced a smile and prayed it would not snow again until next December.